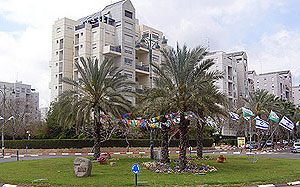 Yehud is a city in the center of the country, in the eastern part of the Ono Valley, near Or Yehuda, Kiryat Ono and Ramat Gan.

Yehud was founded in 1948. His first inhabitants were immigrants from Yemen, Turkey and Poland.

In the 1990s, the city's population was replenished with immigrants from the

CIS countries and from Ethiopia. In the city there is a large industrial zone, in which, among other things, the enterprises of the aviation industry are located.

Yehud has a common municipality with the settlement of Neve Monoson.


City streets and attractions near the city:

City streets and attractions near the city:

Israeli Settlements in Judea and Samaria

Religious Cities and Villages of Israel

Distances between Cities and Villages

The Health Care System in Israel

Hospitals and Medical Centers in Israel

Cities and Villages of Israel

Traveling in the Holy Land

The Antiquities of the Land of Israel